‘I wouldn’t want to be you’ 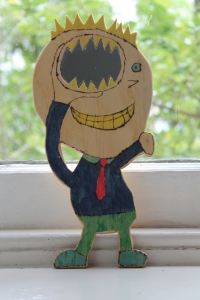 For years I held his hand, warned him of unlikely dangers, watched him climb over the rocks, packed his bag for school camp, nagged him into cutting his hair, made him sandwiches, and paid out – it felt monthly – for new shoes.

And then, a couple of weeks ago, he turned to me – in the middle of a conversation about my getting no help in the kitchen – looked at me squarely, and said, ‘I wouldn’t want to be you’.

Seeing me flinch, he backtracked. ‘I like being me’, he added, as if this explained his slip. My mature self immediately understood what he was saying. He likes being who he is, I said to myself, and he’s looking forward to his future. And, again understandably, he doesn’t want to be more than halfway through life – as he sees me to be.

However my less mature self felt winded by his chance comment. ‘What do you mean?’ I wanted to reply. ‘What’s so wrong with being me?’ – resentful that what was self-evident to him, was so deeply painful for me.

But of course my son was only telling me what I told my mother, in so many words, when I too was fifteen and three-quarters.

These days I live with two teenagers who love me as much as they ever did – and often tell me so. They are generous with their affections and need me as much as when they were younger – though for different things, of course. But the big change is this. Whereas when they were younger they looked up to and admired me, these days everything I say and do is automatically suspect, open to query. In other words, if I’d been a statue, they’d have toppled me.

They, of course, will never be middle-aged. They are in the flowering of their youth. While they may not welcome every surprise of puberty, they are heady with their own strength and immanence. Urgency for life, and the vitality that goes with this, is theirs.

I, meanwhile, have reached a hump, a crossroads of sorts. My GP tells me I’m in good shape. Yet she makes no bones that it’s all maintenance now – and that the ageing process, from hereon in, is entirely up to me.

In Roald Dahl’s story ‘The Twits’, an especially nasty husband tricks his wife into thinking she’s getting shorter by the day – by adding a few inches to her kitchen chair each night. This is something of how I feel when out cycling with my kids. Gone are the trailer wheels and the odd wobbly crash. Instead my son and daughter streak ahead on their new bikes, while I puff up the rear on my trusty stead, fantasizing about a carbon fibre bike I’ll probably never buy.

Last week, when they were safely at school, I put down the vacuum cleaner and measured myself against the kitchen door – just to check that I hadn’t shrunk. But, no, I hadn’t. I am exactly the same height that I was when I first gave birth. And yet, my son is right, to him I am now smaller. I loom less large in his mind, therefore it follows that I must be smaller.

Last weekend I tried to pull rank with my son. His homework was piling up all around him. Teachers were shooting me frustrated emails. And all Alex could do was lie on his bed or talk about where the ship he crews on might be sailing to next.

So I decided to use a blunt club. ‘Alex, if you don’t pull your finger out and keep up with your homework, you won’t be going on that next voyage’. And I pushed past him, laden with a heavy washing basket, and headed for the line in the garden.

‘That will teach him’, I said to myself, grabbing pegs from the basket. ‘That’s just what my parents would have said to me’, was my next thought. But then my steadfast thinking became less steadfast. It didn’t feel right to threaten Alex. It wasn’t okay, in the history of our relationship, to suddenly turn round and issue an ultimatum. I didn’t go in for sabre rattling – however sensible it sounded in parenting manuals.

‘I’m sorry’, I said to Alex, who was lying on the grass reading. ‘I shouldn’t have threatened you. I don’t want to do a trade off with you like that. If you don’t want to do your homework, that’s your business’.

He got up off the grass and gave me a hug. And in that instant I forgave him for not being conscientious with his schoolwork – and for not wanting to be me. So long as he likes being who he is, and I like being who I am, and we can both be ourselves when we’re together, that’s all I care about.