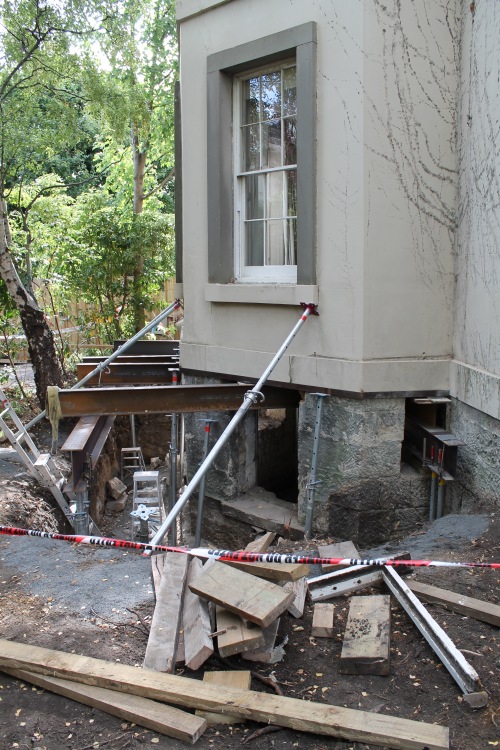 My kids, now teenagers, think my husband and I are vain to want to live in a lovely old house. In their minds living in a lovely old house comes second to more important things, like boats and travel and global problems. For them a house is somewhere to sleep at night, to fill up on food and to avoid doing homework. A garden is somewhere to play with the dog and to grow a few vegetables.

When we took on the house we now live in, a big old house in Hobart, my husband and I shared a vision. It spoke to us at a deep level. It answered something in me that I’d never thought life would offer. I knew that my husband, an aesthete and idealist, felt this too. More than this in his mind a house could never be too beautiful – a thing of beauty is a joy forever.

Standing in the driveway seven years ago with the silver-tonged estate agent we both knew what we were taking on. The family who was selling the house had, in our eyes, failed it. Quite apart from basic maintenance they hadn’t loved it for decades. Instead there had been divorce and broken pipes and rising damp. A dentist’s chair had found its way into the basement, along with an elderly golden retriever.

We were game. In many ways we were ready. A project like this made sense of our marriage. It was an adventure. I knew that I was taking on a property more than a house, just as my mother had done when she took over her mother-in-law’s house when I was small. I knew that living in a big house meant that I’d rarely get to sit down. That I’d be living for it as well as in it. And still I said yes.

Over these seven years I have poured huge amounts of energy into the house we now live in – painting walls, scraping floors, making curtains and, more recently, holding it all together. Looking after our lovely house has been the bravest thing I’ve done so far. Not brave in the battle, fire-fighting sense. But brave in the intimate day-to-day sense of caring for something enough to surrender myself to it.

Our house has helped me grow up the way nothing else has. The garden with it’s forest of trees – I wear down a rake each autumn – has taught me the meaning of the seasons. The curved banister has taught me a thing or two about beauty. And the house as a whole with its rambling garden has taught me humility. For I have failed this house. I can never live up to the ideal that my husband and I shared that cold winter day when we stood in the driveway with the deceptively mild-mannered real estate agent and said yes.

And yet I have won too. This house has shown me, kindly enough, that although I’ll never be on top of its running I can still appreciate its beauty. Each night I go to sleep knowing that I’ll never live in a more beautiful house, that I’m already living in my own Howard’s End. This awareness has allowed me to stop running – love aside, there is nothing I want more than it. One day I’ll retire from this big house into a pleasingly small cottage. But it will be with grace and gratitude for having been shown how to love something greater than me.

This house was built by convicts in 1846. In the engineer’s survey report, which we had done before buying, a few problems were unearthed. But they were hidden deep in the report and described in a way that gave us confidence that we had many years, decades perhaps, before they would need attending to. The house had stood the test of time – a phrase bandied about – and there was every reason to think that it would go on doing so.

Each time a new problem came up, we rolled with it. A new roof, gulp, no problem. New electrics, fair enough, what about just having floor lamps? A chipboard floor in the basement – let’s do it. Then, over three or four years, we ran into problems with our neighbours, leading to my being taken to court for illegally removing two chimneys. One tribunal and hefty legal fees later the front chimney was reinstated. The engineer who drew up the plans for it told me cheerfully that though it could barely be seen from the street, the new chimney looked great on Google Earth.

When the stonemason was on the roof, pulling sandstone blocks up on a pulley, he looked over and noticed a bulge in the sitting room window. ‘Sure’, I said when he asked me about it, ‘that’s been there for years’. ‘But,’ the mason said, frowning, ‘it’s a big bulge’.

I agreed that he would treat the damp that seemed to be causing the bulge. But when the bobcat got down to the footings the news got worse. ‘I hate to be the bearer of bad news,’ said the stonemason, ‘but the inner and outer walls have parted company by this much’, and he held his thumb and index fingers apart a small distance. ‘The whole basement will need jacking up before the wall can be rebuilt.’ Like being told I had a life-threatening disease it seemed pointless to argue. Instead I looked blankly at his kindly face, thinking in my head of dollar signs rising up inside helium balloons.

It’s not what happens, it’s how you respond to what happens – for the first two weeks this thought kept me sane as the front garden I’d planted and worked up was decimated by workmen, all of whom I liked. Then last Friday I was at home cleaning the house late afternoon when the south side of the house moved. There was a flurry of activity outside. Two men had been working under the house when a new crack opened vertically along the ground and first floor windows. The engineer appeared. Calculations were checked. Yet more thick lengths of steel were welded into place. My maturity, I told myself, is being tested.

I don’t love our house any less for it having let us down. Nor, for that matter, for my having let it down. However today I did notice that the phrase ‘safe as houses’ swirled through my mind as I vacuumed the stairs and greeted my daughter as she came home from school on this just another Friday in our lovely old house in Hobart. Touch wood, since this time last week there has been no more movement between the outer and inner walls…