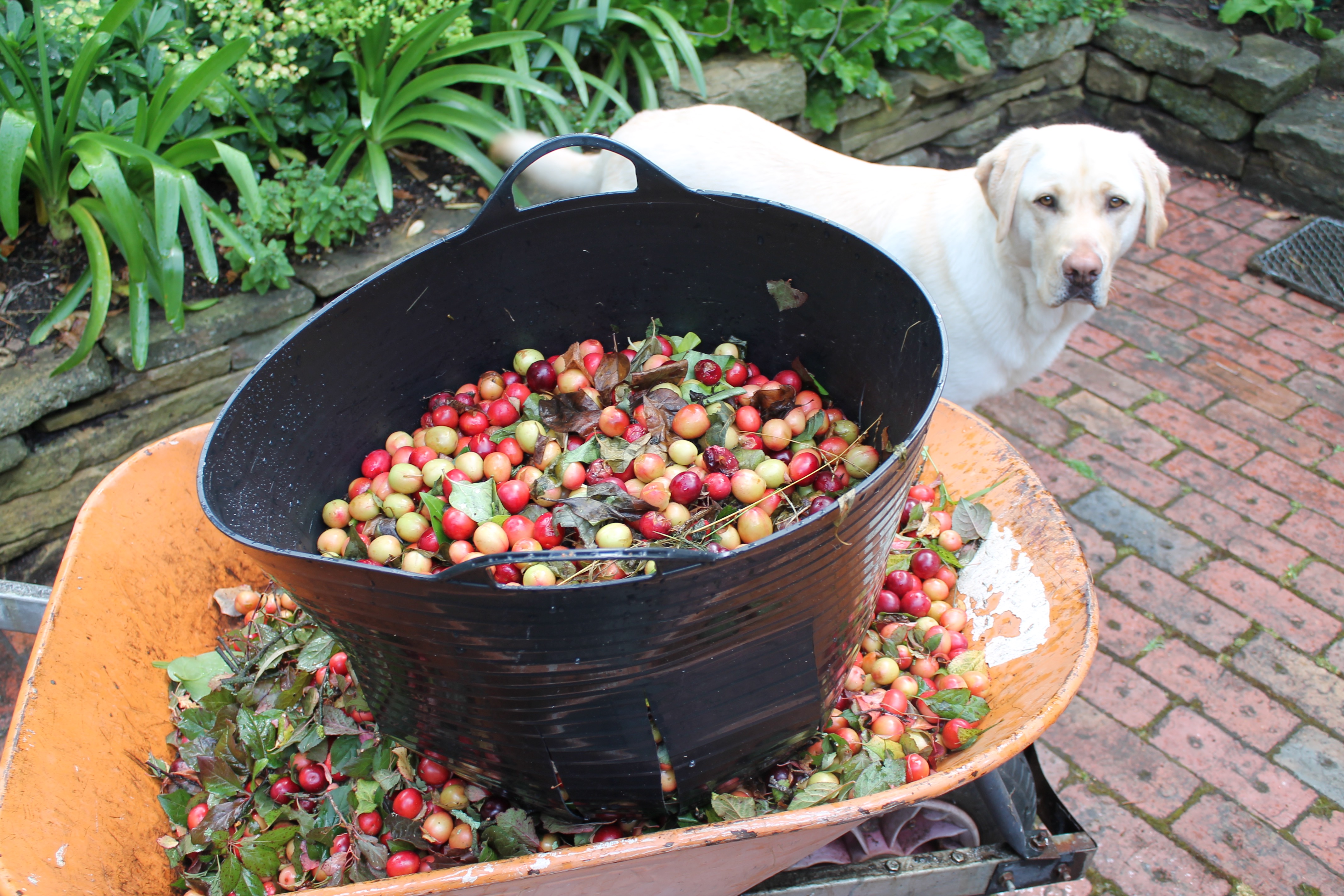 ‘Life is a series of problems’, the matronly grandmother says to her grand-daughter, half-way through Downton Abbey. ‘You solve one problem and you move on to the next’. The grand-daughter, who has just finishing telling her grandmother that she had a baby out of wedlock, a big deal early in the 20th century, smiles wanly. ‘Yes’, continues Maggie Smith, who plays the grandmother in the drama series, ‘it’s our problems that define us. They make life interesting. And then, when we come to the end of all our problems, we die’.

A year ago, almost to the day, I invited a married couple I didn’t know well for dinner. The dinner was a low key, kitchen-table affair, the kind I like best. After we finished eating and the plates were cleared away, there was a moment of quiet. I’m fine with pauses, but this one was odd. It was Anna who broke the silence. ‘Can you smell something?’ she asked. My heart sank as I caught hold of the corner of the high kitchen table and peered beneath. There, across the wide wooden floorboards, was a trail of dog poo that ran the entire length of the kitchen table.

Like a scene from a 70s sit com, the two men got up from the table without uttering a word, picked up their glasses, and moved next door. This left me begging Anna to join them, as I donned rubber gloves, grabbed bin bags and paper towel, and sloshed some eucalyptus oil into a bucket of hot water.

Eventually the plum crisis passed, as most crises do. After dropping their last plums, the fruit trees slept through the winter. Then suddenly it was spring again. The plum trees flowered, thanks to generous rain. Determined not to be outwitted this time, I visited the garden hire shop and hired a hedge trimmer, a feudal looking instrument with a scythe at one end of its long handle. That same night, I set about whacking down as many unripe plums as I could on to the ground sheets I’d put down to catch the fruit that rained down from the branches above.

I was helped by Nic, a Columbian student currently living with us. When I wheeled the compost bin down the garden, and opened the lid wide so that we could pour in the plums straight off the ground sheets, he frowned. ‘Aren’t you going to eat them?’ he asked, incredulous. ‘Um, there are just too many’, I said, lamely. ‘Besides’, I added, feeling defensive, ‘it would take me hours that I haven’t got to sort through them.’ ‘In my country’, said Nic, ‘we make jam and wine with fruit like this’. ‘Yes’, I thought, ‘except that you’re not in your country, and so we don’t know if that’s what you’d do’. As soon as my mean thought was out, I felt cross with myself for having it. For I too, like Nic, had lived on the opposite side of the world in my 20s. I too had found myself in the middle of other people’s lives, other people’s gardens, doubtless making judgments that it wasn’t my place to make. How could I have known, back then, what it might be like to live year after year with a greedy dog who gorged himself sick on fallen fruit and never learned the lesson?

‘Why don’t we fill the wheelbarrow with these plums?’, I said to Nic. ‘Then we can leave it in the street with some plastic bags, so that whoever wants some plums can take them?’ ‘Yes’, said Nic, sounding relieved. ‘That’s a good idea’.

Last Saturday, after Nic went on a long hike and my kids both crewed in a weekend yacht race, there was a storm wild enough to fill another wheelbarrow of cherry plums. That night, the night after Christmas, in a pitch black hour between midnight and dawn, our dog wouldn’t stop barking. Lying in bed, I ran through possible causes. Was Digger replying to the dog visiting neighbours for Christmas, who I could hear barking? But even after the neighbour’s dog stopped, the barking continued. Could Digger’s paw be stuck in the door of his crate, which he usually opened from the inside? Still more barking. Perhaps Digger had escaped his crate and impaled himself on a coat hook? Probably not, I told myself, calling out in a sleepy but stern voice for him to stop barking, and schooling myself to wait for his whimpers to cease.

I knew there would be a mess to clean up when I went downstairs the next morning. There was. All those plums had done horrible things in Digger’s tummy; the greedy lesson that he would, a classic Labrador, never learn.

That morning, my husband suggested putting up a temporary fence between our courtyard and grass, just as we’d done when Digger was a puppy. That way, Digger couldn’t gorge himself when he had nothing better to do but truffle-hunt for fallen fruit. ‘Great idea’, I said, and thanked him, as I reached for my phone to text the handyman.

Our handyman Rob, whom I consider a friend – you can’t live in a big old house without making friends with your handyman – arrived an hour later, just as I was heading out for a walk with Digger. Under one arm, he carried a roll of red plastic netting that he mentioned he’d found at the back of his garage, and not the wire mesh I’d hoped for. My heart sank. I knew, instantly, that this red mesh would cause my husband – who works in a hut at the bottom of the garden and cares about aesthetics above all – to inwardly weep. ‘Perfect’, I said brightly. ‘And thank you so much for coming before you disappear on holiday’.

Rob and I set to work and, an hour later, a temporary fence and makeshift gate had divided the garden in two. ‘It looks like a crime scene’, said my son, when he returned from his stormy boat race, his eyes red with exhaustion.

These last two mornings, I’ve crept downstairs. Instead of letting out Digger straight away, I’ve slipped down the side of our house and tossed any fallen plums I could find into a bucket. I haven’t tried to collect all the plums. Hundreds of them are hidden safely between and beneath strands of ivy. I pick up just the ones that glint in the sun, on my private Easter egg hunt.

The first morning I collected cherry plums, I resented it. I was wearing my pyjamas and slippers, and had just finished cleaning up Digger’s plum poo explosion. As I plucked cherry plums from between the ivy, my fingernails filled with moist soil. Collecting fallen fruit felt like just more task, one more chore that no-one but me in my family recognised the value of doing. ‘Is that really necessary?’ I imagined my husband silently asking, as he passed by with his morning coffee, on his way to his garden office.

The second morning I slipped out to collect plums from amongst the ivy, I was up and dressed. I’d done my morning yoga and didn’t mind picking up the plums that I knew, if left, would cause our hapless dog to make himself sick. For despite the red mesh fence dividing the garden, we still play with Digger on the grass; and, as soon as he tires of chasing the ball, he sidles off, as if magnetized, to snuffle for plums.

This morning I came downstairs, snuck outside and felt almost Zen as I picked up fallen fruit in the morning sun. I wasn’t exactly grateful for the task. But I didn’t struggle against it either. I knew why I was doing it; accepting that, unless there really is a God, there can be no audience for my efforts to keep our plum numbers down. I also felt heartened, knowing that my morning collect wouldn’t go on forever. Before long, summer plums would give way to autumn leaves, and so on over again.

After eleven years in our big old house, I accept that this is the way of things in large gardens. Picking up cherry plums from the ivy that runs the length of one side of our garden no longer feels like the depressing problem it did just three days ago. Thanks to Nic, our handyman and the scriptwriter of Downton Abbey, too many plums is a problem I feel I’ve moved on from.

2 Comments to “too many plums”